What is a Vaquita?  This was the question that I asked of my friend and collaborator Sean Bogle when he called me in the summer of 2014 to tell me about an opportunity to work with the group Save the Whales on an advocacy and outreach campaign focused on this animal.  The vaquita was completely unknown to me at the time, and I was shocked to learn from Sean that this unique species was the world’s most endangered marine mammal.  I immediately began to wonder – how could such a distinct animal facing such a dire crisis be a complete unknown?  This conversation would set off a chain of reactions that would lead to Sean and myself getting involved in a multi-year effort to spread awareness of the vaquita and the causes behind it’s dramatic decline.

Rare image of vaquita in the wild, captured in 2008 by Chris Johnson.

What I learned from Sean, as well as subsequent research, is that the vaquita is a small species of porpoise – about five feet in length when full grown – that lives only in the very northernmost waters of the Gulf of California (also known as the Sea of Cortez).  Porpoises are a type of cetacean, the group that also includes whales and dolphins, and the vaquita is actually the smallest of all cetacean species.  Although they look similar to dolphins in many ways, porpoises are typically quite shy.  They stay far away from boats and human activity, while dolphins are known to be quite playful and expressive in the presence of humans.  Although they are shy and extremely difficult to see, the vaquita has a very distinct look.  It’s been dubbed “the panda of the sea” because of its dark eye rings and black lips – it truly stands out among fellow cetacean species.

Vaquita killed in a totoaba gillnet in February 1992. Photo by Christian Faesi.

Sean and I learned that the vaquita’s shyness was part of the reason why the species was so unknown back in 2014.  Very few people have ever seen a living vaquita, and because it’s nearly impossible to capture images of the species, media outlets have been reluctant to cover the vaquita issue.  While we certainly shared some of that reluctance initially to get involved in a documentary project focused on a species so difficult to see and capture images of, we felt that the need for action was so urgent that we had to take action.  We began to dig into the the vaquita’s history and background, uncovering a wealth of fascinating information.

These scientists who “discovered” the vaquita, Ken Norris and William McFarland, called their discovery “cochito”, but the name didn’t stick.  The name “vaquita” was already used among fisherman for the species and within a few years this local name had made it’s way into the scientific literature.  But where did the name vaquita, which means “little cow” in Spanish, come from?  The first interactions that local fisherman had with the species came when they began pulling up dead vaquita as bycatch in their gillnets.  At the time, fishing bycatch was often used for sustenance.  Dead vaquitas were eaten, and their meat was thought to be of a similar color to that of a cow – hence, “little cow”.

The vaquita is a truly unique and distinctive animal, with an appearance and behavioral traits that are quite different that that of it’s closest evolutionary relatives.  Initially it was assumed that the vaquita was most closely related to the harbor porpoise, but subsequent genetic research has shown that it’s closest living relative is actually the Burmeister’s Porpoise, which is found off the coast of South America.

The split occurred roughly 3 million years ago, and it’s easy to imagine how a population could become isolated in the Northern Gulf of California.  The marine habitat in this northernmost region of the gulf, very near the delta of the Colorado River, is quite different from the marine ecosystems found further south in the Sea of Cortez.  Sediment from the Colorado River creates a shallow basin with extremely warm and cloudy water.  In the summer water temperatures can approach 90 degrees.  Strong tides constantly mix up the sediment in the water, making it so cloudy at times that you wouldn’t be able to see more than 2 or 3 feet in front of you.

The distinctiveness of this ecosystem is the cause of the region’s high level of endemism – many of the marine species found here can be seen nowhere else on the planet.  The vaquita thrives in this environment – it uses high frequency sonar clicks to navigate through the cloudy water and hunt for food.  These sonar clicks allow the vaquita to “see” its surroundings using echolocation in a manner similar to bats.

Because of it’s relatively small and isolated island of unique marine habitat, the vaquita population has been small throughout historic times.  In the early 1900s it has been estimated (based on genetic analysis) that there were about 5,000 animals living in an area the size of Connecticut in the northernmost section of the Sea of Cortez.  Scientists have learned quite a lot about the vaquita in the short time since they became aware of its existence – it is clearly a species that is uniquely adapted to the unusual marine ecosystem that it calls home. 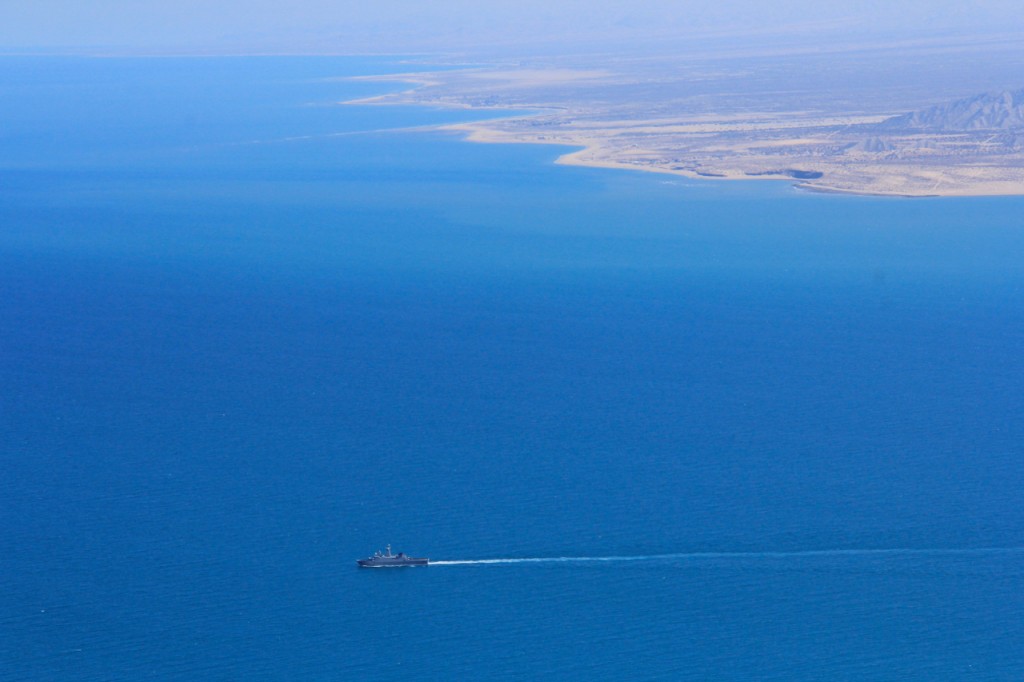 An aerial view of the Northern Gulf of California. Photo by Sean Bogle.